GIannis Antetokounmpo had a huge dunk among his 15 points, and Brook Lopez led the Bucks with 25 as Milwaukee beat up the Detroit Pistons 121-98 on New Year's Day.

The Bucks out-scored the Pistons in every quarter en route to their 23-point victory, and led by 16 at halftime.

Milwaukee, now 26-10, continues their six-game homestand on Friday night against the Atlanta Hawks. The Bucks are 3-0 so far in the home stretch, and will play the Raptors and Jazz before playing at Houston on January 9, their next road game. The Bucks are a game behind the Raptors for the top spot in the Eastern Conference, and one game ahead of Indiana. 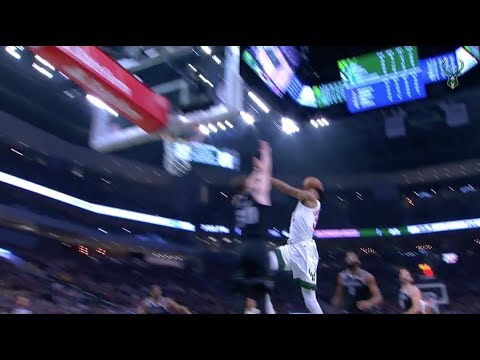 On one hand, Wisconsin hoops fans will kind of feel bad for Jon Leuer in his attempt to defend this Giannis Antetokounmpo dunk. On the other hand, Giannis is...
posted by Jimmie Kaska - 1 year ago