It was a dominating Game 2 win over the Milwaukee Bucks over the Toronto Raptors in Game 2 of the Eastern Conference Finals, 125-103. Our crew recaps Game 2 and gets the table set for Sunday's Game 3.

After key bench contributors rallied in the second half of the Game 1 win, the Bench Mob was out in full force for Game 2, with the trio of Ersan Ilyasova, George Hill, and Malcolm Brogdon scoring a combined 44 points. Plus, Giannis Antetokounmpo was his usual MVP self, scoring 30 points to pace the Bucks in the win.

Our postgame shows air on 97.3 The Game and on iHeartRadio! Take a listen as we recap the big win and look at the series now 2-0 heading to Toronto on Sunday night. 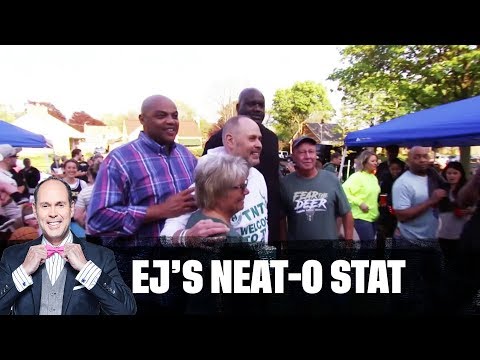 The Bucks' playoff run has brought TNT announcer Ernie Johnson back to Milwaukee - not only for the games, but not visit his birthplace and the Enderis Park house he...
posted by Eric Paulsen - 8 months ago

During the NBA on TNT Postgame Show, Charles Barkley put up $45,000, the cost of one well as part of Malcolm Brogdon's Hoops2O initiative that brings clean drinking...
posted by Jimmie Kaska - 8 months ago

Milwaukee started hot and won big over Toronto on Friday night as the Bucks defeated the Raptors 125-103 at Fiserv Forum in Game 2 of the Eastern Conference Finals....
posted by Jimmie Kaska - 8 months ago

See all of the biggest plays from the Milwaukee Bucks' 125-103 victory over the Toronto Raptors in Game 2 of the Eastern Conference Finals at Fiserv Forum!
posted by Jimmie Kaska - 8 months ago

Game 2 goes to the Milwaukee Bucks in convincing fashion, blitzing Toronto in the first half by 25 points before settling in for a 125-103 win. The Bucks are now up...
posted by Jimmie Kaska - 8 months ago

The Warriors Can't Beat The Bucks Without Kevin Durant

Jason McIntyre believes Golden State needs a healthy Kevin Durant in order to get by Milwaukee in the Finals.
posted by Gavin Kinsel - 8 months ago