After Milwaukee lost to Toronto Tuesday night 120-102 in Game 4 of the Eastern Conference Finals, the series effectively becomes a best-of-three beginning Thursday night at Fiserv Forum, with the Bucks and Raptors tied at two games apiece. We recap Game 4 and preview Game 5 here!

While poor shooting was the major issue in Game 3, poor defense hampered the Bucks in Game 4, as well as committing several turnovers that contributed to Milwaukee's demise. Now that the series has up to three games remaining, with two at Fiserv Forum, the Bucks need to get it all back together to avoid falling behind 3-2 and sending the series back to Toronto in a must-win game.

Our team had instant analysis and reaction after Game 4 on 97.3 The Game! Listen below. The Bucks and Raptors are now a best of 3 series

Lucas in the Morning: Breaking down the Bucks loss to Drake and the Raptors
posted by Drake - 8 months ago 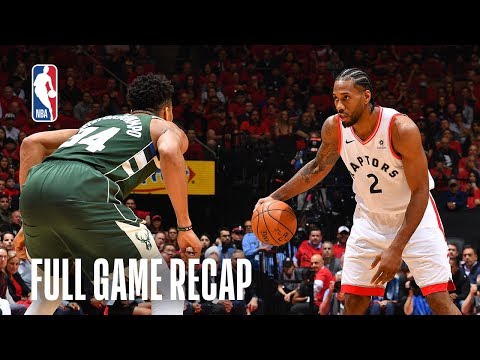 The Toronto Raptors aren't going down without a fight.
8 months ago

The Raptors and Bucks are the Same One Trick Pony

Colin Cowherd says the Raptors and Bucks are a one-trick pony that will always struggle to get secondary help behind their stars.
posted by Wil Leitner - 8 months ago

Hear from coach Mike Budenholzer, Giannis Antetokounmpo, and Khris Middleton following the Bucks' 120-102 loss to the Raptors in Game 4 of the Eastern Conference...
posted by Jimmie Kaska - 8 months ago Series is now tied 2-2, with Game 5 Thursday in Milwaukee
8 months ago

Turnovers and a sudden disappearance by the bench (and the Bucks' vaunted defense) helped contribute to the demise of Milwaukee in Game 4 of the Eastern Conference...
posted by Jimmie Kaska - 8 months ago

Giannis Antetokounmpo and Khris Middleton combined for 55 of Milwaukee's 102 points, but the Bucks lost to the Toronto Raptors 120-102 in Game 4 of the Eastern...
posted by Jimmie Kaska - 8 months ago